Both are now available online from www.meetingchange.nz and Amazon.com. They have been released at the start of the 101st meat export season, since the establishment of the NZ Meat Board, which celebrated its centenary this year.

Meeting Change, the NZ red meat story 1997-2022, co-written by Ali Spencer and Mick Calder and published by Mary Egan Publishing, details how early 2000s changes to legislation brought big change to the NZ Meat Board, its producer organisation, now Beef + Lamb NZ Ltd, and the whole red meat sector. Efforts to restructure, overcome the pressures of declining stock numbers, overcapacity and clashes of perceptions, personalities and politics which torpedoed those conceptual and perhaps grandiose proposals are all covered in its pages. Well-illustrated and referenced, the 404-page book contains more than 180 images.

Its predecessor, Meat Acts 1972-1999, co-written by Mick Calder and Janet Tyson and originally published by Fraser Books, has just been digitised by Printcraft Ltd, Masterton. Meat Acts went behind the 1970s-1990s scenes of meat company and ownership changes and the company and Meat Board politics. It covers the secret manoeuvres and surprise takeovers, the dividend windfalls and dramatic changes of fortune.

Both eBooks are available from https://meetingchange.nz, or from Amazon.com. 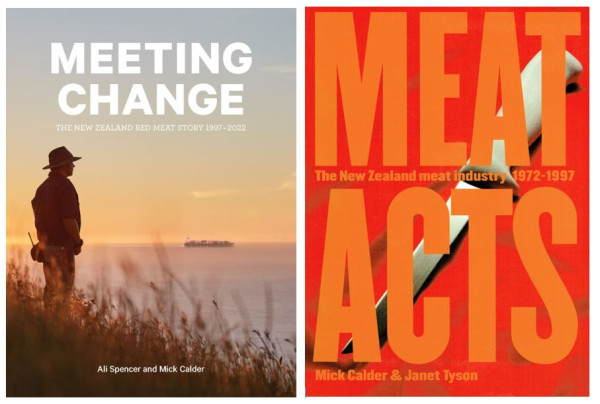